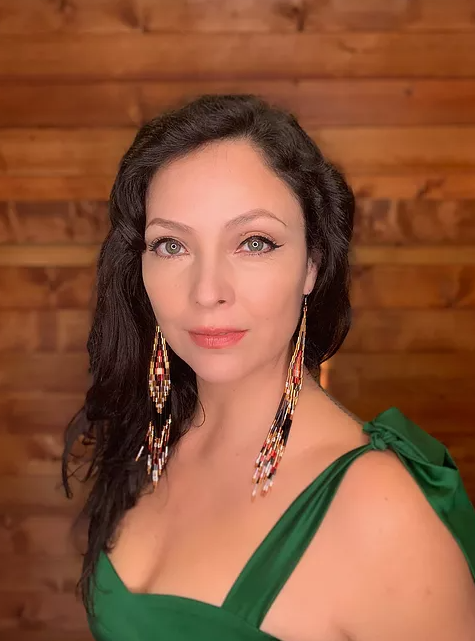 Indigenous choreographer, activist, researcher and Artistic Director of Kaha:wi Dance Theatre, Santee Smith has been announced as one of the Keynote Speakers for our next international conference Dancing into Communities which will be hosted online by daCi Canada from 10-15 July 2022 I

Tekaronhiáhkhwa Santee Smith is an internationally recognized leader in the performing arts. A multidisciplinary artist and producer from the Kahnyen’kehàka (Mohawk) Nation, Turtle Clan from Six Nations of the Grand River, Ontario, she is one of Canada’s leading dance artists and an accomplished pottery designer. In addition to an MA in Dance from York University, she holds degrees in Physical Education and Psychology from McMaster University where she holds the position of Chancellor.

Santee will be joined by dancer, choreographer and motivational entertainer Luca “Lazylegz” Patuelli. Luca has been dancing (B-boying) since he was 15-years-old. He has developed a unique dance style incorporating his crutches and the strength in his arms, that has gotten him worldwide recognition. Lazylegz has been featured on Ellen, So You Think You Can Dance Canada, America’s got Talent, plus others. Luca was the segment director and lead performer for the 2010 Vancouver Paralympic Opening Ceremonies. Luca is the founder and creator of the ILL-Abilities™ Crew, an international B-boy crew comprised of the world’s best “ILL-Abled” dancers. Luca also co-founded Projet RAD which was Canada’s first inclusive urban dance program offering people of all ages, all abilities the possibility to participate in accessible dance studios. Luca has been recognized as the Canadian Ambassador for Dance and received a Meritorious Service Medal from the Governor General of Canada for his dance outreach programs.

​Luca speaks 4 languages (English, French, Italian, and Spanish) and travels the world teaching/sharing his passion for dance to people of all ages and all abilities. Luca is now combining what he has learned with ILL-Abilities and Projet RAD to take his career to the next level while constantly sharing his message to the world that “It’s about taking the bad and making it good” and there are “No Excuses, No Limits”!

Dr Alfdaniels Mabingo is a Ugandan dance researcher, scholar, performer, educator, Afro-optimist and co-founder of AFRIKA SPEAKS. Born and raised in his ancestral village, Mbuukiro, on the shores of Lake Victoria in central Uganda, East Africa, he holds a PhD in Dance Studies from the University of Auckland. A recipient of the prestigious Fulbright scholarship, Mabingo also holds an MA in Dance Education from New York University; as well as an MA in Performing Arts and a BA in Dance, both from Makerere University in Uganda. He has taught dance courses at Makerere University in Uganda, New York University in the US, the University of Auckland in New Zealand, and Edna Manley College of the Visual and Performing Arts in Jamaica. His research sits at the intersection of decolonization, interculturalism, postcolonialism, dance pedagogy, creative economies and African philosophy. Mabingo has published more than 20 peer-reviewed scholarly articles and book chapters. His book ‘Ubuntu as Dance Pedagogy: Individuality, Community, and Inclusion in Teaching and Learning of Indigenous Dances in Uganda’ was published by Palgrave McMillan in 2020. Mabingo’s academic writings have been recognized and recommended by NDEO and DSA as essential readings on anti-racist pedagogy.​Mabingo has received numerous, prestigious scholarships and awards for outstanding academic leadership and excellence. He has taught dance in schools, presented research, and staged and performed choreography throughout the world.

Dr Ann Kipling Brown has been a daCi member since 1982. At the Dancing into Communities conference, she will present a retrospective on daCi exploring the history and evolution of the organisation led by volunteer Executives and Advisory Board members, a number of conference organising committees and attendees of all ages.

NEW DATES FOR YOUR DIARY